» What To Do » Flora MacDonald’s Monument 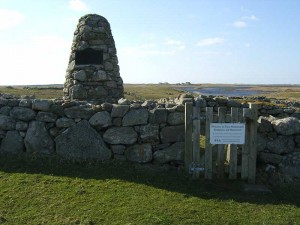 The text below is taken from the monument at Milton:

After the Jacobite defeat at Culloden ‘Bony Prince Charlie’ faced capture unless he could escape to France.  While British government troops were searching for him, he sought refuge in Uist.  His supporters wanted to smuggle him from Uist to Skye, and then onto a boat to France.  Flora agreed to help them.

On 28th June 1746, Flora MacDonald and her Isish maid ‘Betty Burke’ sailed from Benbecula over the sea to Skye.  The maid was the thinly disguised ‘Bony Prince Charlie’ and the event is commemorated in the famous Skye Boat Song.

For her part in this bold plot to help ‘Bony Prince Charlie’ escape to France, Flora was arrested and imprisoned in London.  After her release in 1747, she returned to Scotland.  The plan on the monument shows what is believed to be Flora’s house, although some believe this not to be the case.

Chorus: Speed, bonnie boat, like a bird on the wing,
Onward! the sailors cry;
Carry the lad that’s born to be King
Over the sea to Skye.

Loud the winds howl, loud the waves roar,
Thunderclaps rend the air;
Baffled, our foes stand by the shore,
Follow they will not dare.

Though the waves leap, soft shall ye sleep,
Ocean’s a royal bed.
Rocked in the deep, Flora will keep
Watch by your weary head.

Many’s the lad fought on that day,
Well the Claymore could wield,
When the night came, silently lay
Dead in Culloden’s field.

Burned are their homes, exile and death
Scatter the loyal men;
Yet ere the sword cool in the sheath
Charlie will come again.