» What To Do » Cladh Hallan Roundhouses 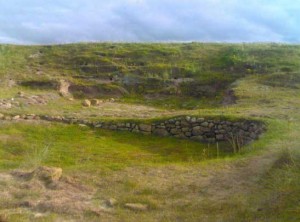 The Cladh Hallan Roundhouses are an archaeological site on the island, noted as the only place in Great Britain where prehistoric mummies have been found.

At first the researchers did not realize they were dealing with mummies as the soft tissue had decomposed and the skeletons had been buried. But, tests showed that both bodies had not been buried until about 1120 BC and that the bodies had been preserved shortly after death in a peat bog for 6 to 18 months. The preserved bodies were then apparently retrieved from the bog and set up inside a dwelling but the reason why the bodies were mummified is a complete mystery.

It may have been for religious beliefs or as a sign of reverence towards the ancestors so that they could be brought out for important ceremonies or perhaps consulted in some way.