» Isle of Eriskay » Whisky Galore and the SS Politician 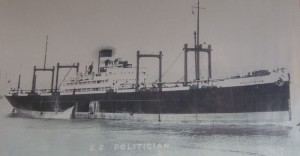 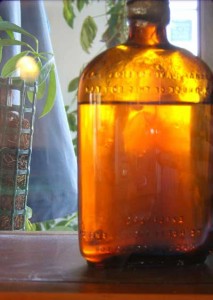 One of the most well known events in the recent history of the Western Isles was the wreck of the SS Politician on the 5th February 1941 and the story was used by Compton Mackenzie for his book Whisky Galore, and later for the Ealing Studio comedy by the same name. Relics and images can be seen at the Am Politician pub and restaurant on Eriskay.

The SS Politician was an 8000-tonne cargo ship which left Liverpool on the 3rd February 1941 laden with amongst other things 260,000 bottles of whisky, bound for Kingston in Jamaica and New Orleans. The whisky was for the American market and therefore no duty had been paid. She sailed up past the Isle of Man towards the Hebrides where the winds increased to gale force.

On the morning of 5th February a young man was combing a beach in South Uist when he saw the ship in trouble and beginning to list. After a valiant struggle by the Captain, Beaconsfield Worthington, to keep his ship on course, the SS Politician eventually ran aground in the storm onto sandbanks off the Isle of Eriskay where she began to flood. Unfortunately as the ship had veered off course an incorrect location was given to the lifeboat crew on Barra. Local islanders were roused and they set forth in a sailing boat to offer assistance to the crew. The lifeboat finally reached the ship and all the crew were rescued.

When the locals learned from the crew exactly what the ship was carrying, a series of illegal salvage operations took place at night, before the customs and excise officials arrived. The islands supplies of whisky had dried up due to war-time rationing, so the islanders periodically helped themselves to some of the 260,000 bottles of whisky before winter weather broke up the ship. Boats came from as far away as Lewis as news of the whisky travelled across the Outer Hebrides. No islander regarded it as stealing, as for them the rules of salvage meant that once the bounty was in the sea, it was theirs to rescue.

This of course was not the view of the local customs officer, Charles McColl, who was incensed at the blatant thievery that was going on. Not a penny had been paid in duty for this whisky so Mr McColl whipped up a furore and made an official complaint to the police. Villages were raided and crofts were turned upside down. Bottles were hidden, secreted, or sometimes drunk in order to hide the evidence.

On 26 April at Lochmaddy Sheriff Court a group of men from Barra pleaded guilty to theft and were charged between three and five pounds. Mr McColl was furious at the leniency of the men’s sentences, but the police, being mainly locals themselves, were tired of the bothering the locals who had not, in their minds, done such a bad thing. However, Mr McColl continued his crusade against these illegal salvagers and some of the men were sentenced to up to six weeks in prison in Inverness and Peterhead.

Back at sea, the official salvage attempts were not going too well, and it was eventually decided to let the Politician remain where she was. Mr McColl, who had already estimated that the islanders had stolen 24,000 bottles of whisky, ensured that there would be no more temptation. He applied for, and was granted, permission to explode her hull and as one islander, Angus John Campbell, commented: “Dynamiting whisky. You wouldn’t think there’d be men in the world so crazy as that!”

In 1987 Donald MacPhee, a local South Uist man, found eight bottles of whisky in the wreck. He sold them at auction for £4,000.

The wreck of the SS Politician still lies off the coast of Eriskay, although it is below the water line as winter gales have destroyed the deck and cabins. In 1988 the island got its own ‘legitimate’ pub, named ‘Am Politician’.